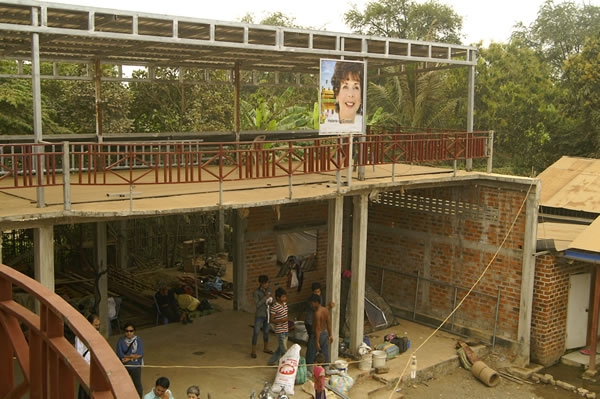 “Stop the car,” I said.  We were leaving the temples of Angkor Watt by a little known back road in Cambodia.  The car stopped.  At the back of an open space was a travelling theatre.  A few people were sitting on the grass. I left the car to find who they were and what they were doing.  Fortunately my interpreter followed me closely. I had never been on that road before and, as it turned out, neither had the theatre company.  They had come down from the north the day before and set up their theatre hoping to attract foreign tourists visiting the temples. They offered me food and I joined them on the grass. No surprise, no rejection. When the interpreter told them that I was also a performer in my country far, far away, all barriers came down.

They were/are Bassac performers. Bassac is an indigenous form of Cambodian opera with a history of many hundreds, if not thousands, of years and that day I happened to encounter the only company that had survived slaughter by the Khmer Rouge. The dictator, Pol Pot had initiated the elimination of all artists.  They performed the ancient Hindu legends, the basis of the mythology of Cambodia to a mainly illiterate population, and as such had to be eradicated to foment his form of Communism.  Only two artists had survived. I met one of them that day.

Len Choeun, the director, had been born into a Bassac Company and because he was a child, had been hidden under the bodies of his slaughtered parents.  When the Vietnamese freed the Cambodian people all he knew was Bassac.  The training starts very young, so he was able to recreate what he remembered and that Company, The Reasmey Angkor Bassac Opera Company, was the one that I met that day. My time was limited, I had to rush back to Siem Reap to get my plane to Singapore.  As I was leaving Choeun, went down on his knees, the tears pouring down his face.  “We are starving,” he said, “Please help us.”

Two days later I was in the States putting together anything that I thought would help them.  The cost of mailing was more than the cost of the clothes, etc.  By trial and error and the help of expatriate Cambodians, a form of support emerged.  Money was the easiest to transfer but the hardest to acquire.  In 2012 we incorporated and Save World Art was born. We are proud to tell you that a theatre is being built to house the Company with class rooms and apartment dwellings, and a wonderful main stage for public performances.

Our mission of supporting indigenous art that has been threatened with extinction has carried us in to many countries in many forms  We know that we have not only contributed to the rescue of almost forgotten art forms but have saved lives, strengthened local economies and raised the quality of life.  Our mission is daunting.  We are never quite sure where we are going to be taken next.  Come join us for the adventure and the wonderful sense of achievement.